Domino?s Pizza is known for its pizza, but what is less known (and maybe a bit surprising) is that a big part of its success can be attributed to digital innovation. The company launched its first iOS app in 2011 and its first Android app in 2012. Since this time, the pizza chain?s stock price has increased by over 952% (versus 77% for YUM Brands, the owner of Pizza Hut; 432% for Papa Johns; and 75% for the S&P 500). Additionally, Domino?s Market Cap is currently $8.68 billion. To put this in perspective, it was about $902 million just six short years ago. That?s nearly $7.8 billion in value creation since Domino?s first brought its product offering to small screens worldwide!

Domino?s has invested heavily in digital innovation (or what some might call its digital transformation) since 2011 and, today, owns the industry?s leading mobile app and digital customer experience. A full 50% of Domino?s U.S. sales now come through digital channels, with customers ordering via Apple Watch, Amazon Echo, Ford SYNC, Samsung Smart TVs, tweet-to-order, text-to-order, Facebook Messenger, and Google Home. Domino?s is truly an omni-channel digital company ? and one that has clearly taken the time to understand its users and their needs, and to design and build iOS and Android apps that deliver a user experience that supports customer loyalty.

So, What?s So Great About Domino?s Mobile App?

Put simply: A lot. Domino?s mobile app includes a variety of features and functionality that ? together ? create a remarkable user experience. A few of my favorites include:

? Pizza Tracker ? This is a great feature that lets users visualize exactly where their pizza is in the delivery process.

? Rewards ? The Domino?s app rewards program is very generous and the free pizzas really pile up.

? Customization ? The Domino?s app allows users to build their own custom pizzas.

? Easy Order ? The Domino?s app also provides the ability to save past orders for quick and easy reordering. 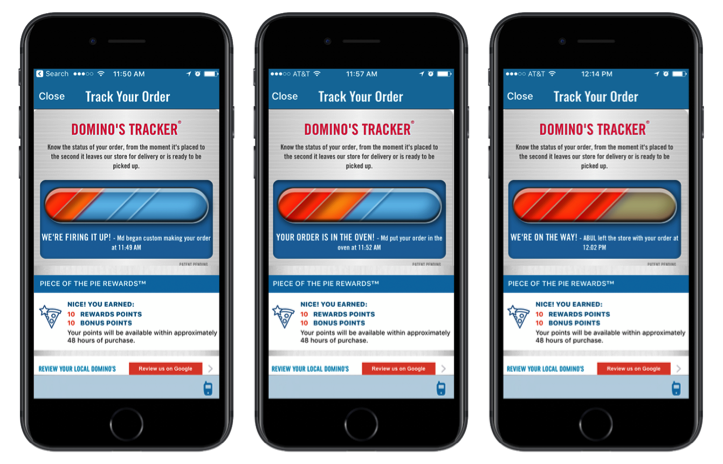 What Other Industries Can Learn from Domino?s

Domino?s commitment to digital innovation, specifically the execution of a mobile app strategy that continues to drive revenue growth, shareholder value, and customer loyalty, is one that business leaders across all industries can learn from. Among the many things Domino?s has done right:

? Digital Strategy –?Domino?s invested considerable time and energy getting to know its existing customers, prospective customers, and competition, so as to have a clear understanding of both needs and opportunities to deliver a winning digital customer experience. Domino?s also made certain that its apps were/are accessible through a variety of channels (as noted above). At a time when consumers demand easy, immediate access to products and services, Domino?s multi-device, multi-channel approach was (and is) spot on.

LEARN MORE ABOUT OUR STRATEGY EXPERTISE AND OFFERINGS HERE.

? Development –?Domino?s used a lean, agile, Silicon Valley-approach in building both its iOS and Android apps. This allowed the company to delivery new features quickly, analyze and iterate to maximize results.

? Management –?Too many companies take a ?one and done? approach when it comes to technology, but Domino?s hasn?t. The company?s ongoing efforts to expand and enhance its digital strategy ? from frequent app updates to a willingness to embrace emerging digital channels ? has shown to be effective for sure (just ask any of the company?s shareholders).

Any Way You Slice It?

Domino?s is a 10x company and the clear winner in the U.S. pizza industry because of its willingness to embrace digital innovation, and there is much to be learned from them that can be applied to other industries?your industry. Want to learn more about how a sound digital strategy can help your company survive and thrive in today?s technology hungry, app-driven world? Engage with us today.

To connect with one of PointClear Solutions? technology?experts, or to learn more about this blog topic (or our digital strategy, design, development, and/or management services), Contact Us. (And don?t forget to follow us on LinkedIn for more great content!)

PointClear Solutions’ strategy, design, development, and management services can help elevate your brand reputation, grow your market share, and boost your revenues ? all in record time. Connect with us to learn more.

Complete the form below, so that we can connect you with the right person. You?ll hear from a member of our team shortly.